Moss exhorts us to remain ‘stewards of democracy’

The Rev. Dr. Otis Moss III, a minister and civil rights leader, shared his grandfather’s astounding determination to vote, which he has captured in a compelling—and free—short film, Otis’ Dream. He moved AFT delegates to tears on Saturday, July 16, then had them cheering as he rallied everyone to the cause of fighting today’s rampant voter suppression.

“Democracy is held in the hands of mothers, teachers and artists, prophets, first responders and poets,” who believe that all children deserve the right to learn and thrive, Moss told the delegates. “You are the forgers of a moral imagination for this democracy.”

As senior pastor of Trinity United Church of Christ in Chicago, Moss is part of a new generation of ministers who preach that love and justice are inseparable from the gospels. His efforts on issues such as mass incarceration, environmental justice and economic inequality are all built on community engagement.

One of Moss’ achievements is Otis’ Dream, which tells the true story of his grandfather, Otis Moss Sr., a World War I veteran, widowed father of five and sharecropper in rural Georgia. A failed attempt by the senior Moss to vote in 1946—he was unlawfully turned away from three polling places—prompted him to tell his children: “Promise me. If you get a chance, you’ve got to vote.” That experience eventually led his son, Otis Moss Jr., to the civil rights movement, where he become a friend and adviser to the Rev. Dr. Martin Luther King Jr.

The film features Dr. Moss III, his father and his son, Elijah—three generations of the Moss family who live in a country where the right to vote is still deeply compromised by the forces of white supremacy.

After the film, Moss thanked the AFT, gave a shoutout to the Chicago Teachers Union and told the stories of two intrepid Black Southerners—one during the Civil War and one during the time of Rosa Parks—who acted brilliantly behind the scenes to defy and thwart white supremacists. “The amazing thing about racism,” he said, “is that racism is arrogant and ignorant at the same time.” So American history is full of victories by Black activists and organizers—victories that racists never thought possible.

As part of extensive community engagement through his church on Chicago’s South Side, Moss has led a team that created a “My Life Matters” curriculum, which includes a video, “Get Home Safely: 10 Rules of Survival” for Black Americans when they are stopped by the police. This video encapsulates “the talk” that so many Black families in our country still must have with their children—rules such as “Make sure the police can see your hands at all times,” and “Do not run, even if you are afraid.” It was created in the aftermath of Michael Brown’s death at the hands of police in Ferguson, Mo.

Moss’ important work shows why social justice and union work are inextricably linked: We can’t move justice forward unless we all move together.

Moss exhorted AFT delegates to remain “the stewards of democracy, the midwives of dreams, the holders of a future yet to be born.” The bad news for democracy is that it is midnight in America, he told them. And the good news is that it is midnight—because as soon as you reach midnight, that means a new day has arrived and morning is coming.

“Morning is coming in these yet-to-be United States of America,” he told a convention hall swelling from tears to cheers. “‘We gon’ be all right.’ Let us reclaim our democracy.” 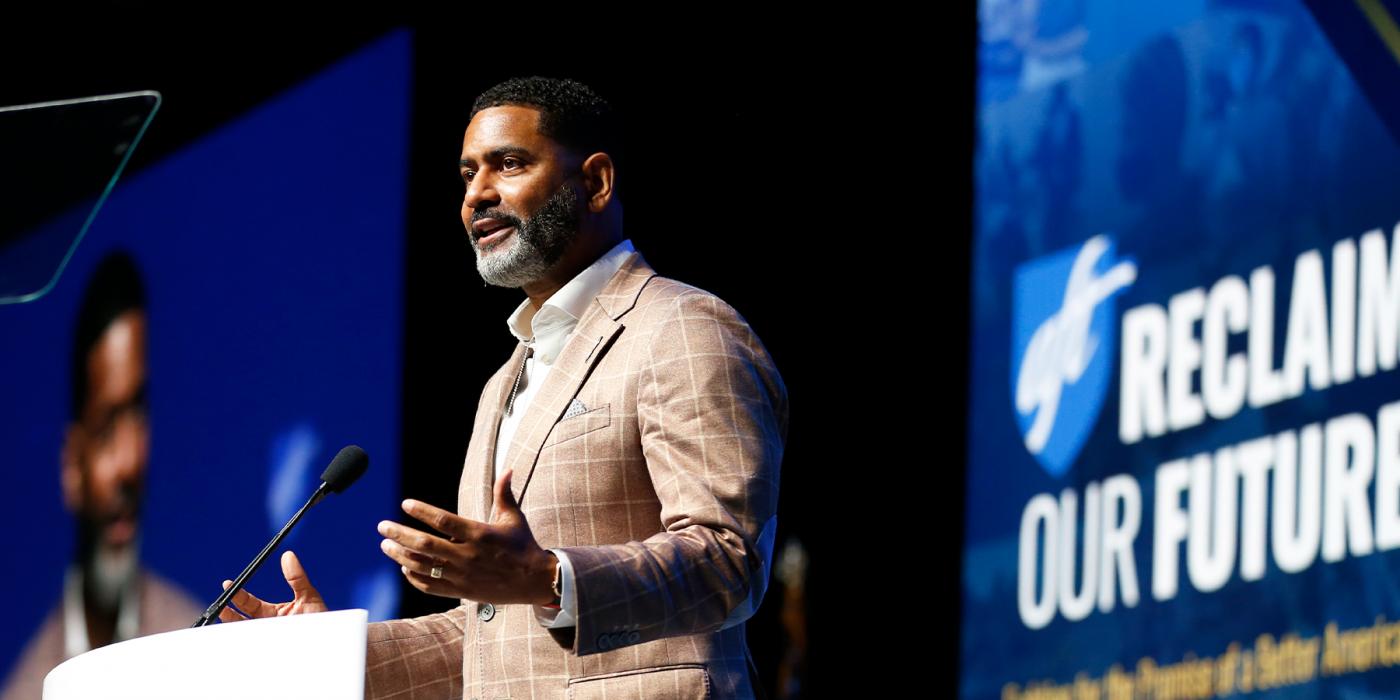